Deploying Cisco Expressway clusters in multiple geographic locations (Cisco Expressway-C and Expressway-E) is a common practice when organizations are expanding their UCC (Unified Communication and Collaboration) platform to remote offices.   Doing this increases reliability since each cluster can be used as a backup to the others, but it can also introduce a whole new set of issues when it comes to delivery of SRV records.   SRV records are pointers in DNS that send the users to cisco expressway endpoints and they include multiple servers for backup and redundancy

When an organization deploys these Cisco Expressway Clusters, they add SRV records pointing to each cluster which the clients then read and use to connect.  When a client connects, it chooses the SRV server in the list with the lowest priority, and the backups will increase in priority.   For example, here’s a set of _collab-edge_ SRV records (figure 1-1) that you’d typically see if the organization was using Cisco Jabber for collaboration (port 8443 not shown)

In the list of SRV records shown, you can see the organization has 4 Cisco Expressway Cluster deployments, once in New York and Los Angeles, USA and One in London (EU) and one in Hong-Kong (AP).   The above DNS SRV records are static and they always stay the same and when clients are in the US everything works fine, but users in the EU and APAC will also get these endpoints, causing high latency and poor video & call quality.

To solve this, we utilize GEO DNS to located the end user’s IP range and match that to a region and then deliver a customized set of DNS SRV records to the client – jabber in this case. This connects users to the closer servers within their specific region which speeds up the connection and lowers the latency on the connection. Applying GEO DNS regions to the SRV records allows us to specify custom lists of SRV records that get delivered to each specific region or country

As you can see from the figure below (figure 1-2), we now are handing back our _collab-edge_tls and _sips_tcp SRV records in custom lists based on user location 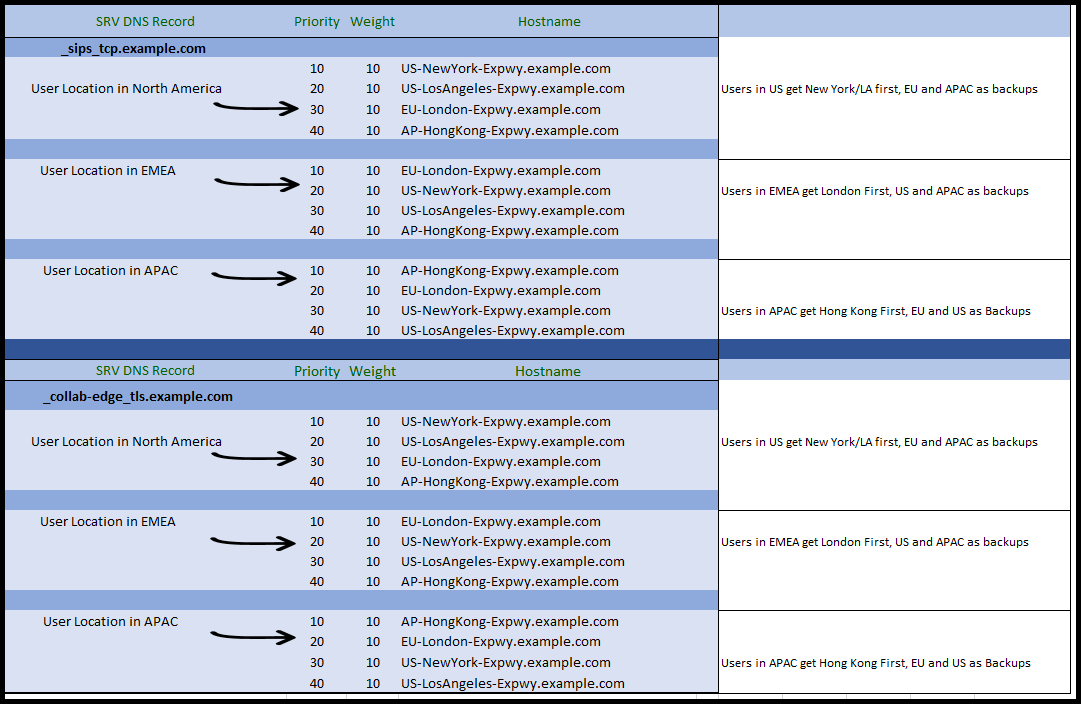